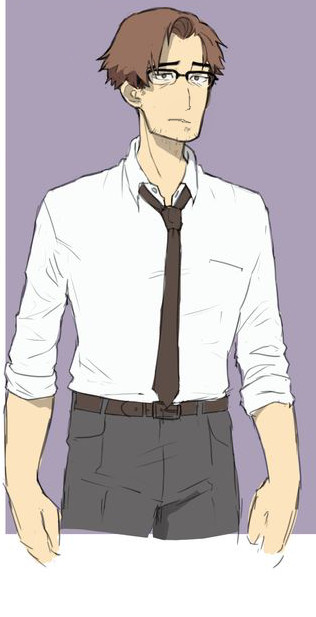 Age: 39
Gender: Male
Physical Description: Any glance or even the greatest of visual quirks would find that Hideo is by all means irremarkable. Nothing about him is special- nothing stands out. He lacks the physical attributes of someone trained to be a hero or even that of a career criminal and instead looks more like a middle aged father. He is the epitome of average, from his brown hair and eyes down to his scrawny physique (75KG) and average height (173cm). Hideo also wears a pair of glasses- the most popular frame of Japan's number one glasses brand.
Clothing/Accessories: Hideo does not have any costume and is not distinguishable from any ordinary citizen. Suits, slacks, dress shirts, ties, and the normal clothes one would wear to the office is all he needs. Occasionally he will wear a long tan rain coat and a large brown hat- similar to many older men, to help mask his identity.
Personality: Hideo is a cunning and ruthless man who above all will always prioritize his wellbeing. His mind moves at an extremely rapid pace, far faster than most, often causing him withdraw into his own mindspace and ignore the world around him. While a keen eye can pick up on his deep analytical power, to the vast majority he just seems rather slow and unintelligent.

While his quirk curses him to be forever ordinary, Hideo has learned to lean into this and purposefully furthers this effect with his choice of clothing, transportation, or even actions. Through his ordinary world he is determined to create an extraordinary legacy. Combat Information Rank: B-Rank

Ordinary World - Mutant Type wrote: Ordinary World is a mutant type quirk that is so subtle that for the majority of Hideo's life he himself was unaware he had a quirk. The physical manifestation of Ordinary World is that Hideo is unable to become physically become exceptional. He is cursed to be average in looks and no matter how hard he trains his body will always look weak and slightly emaciated. In exchange however his quirk gives him a miraculously ability to be incapable of being found guilty- in essence, it is impossible for people to ever perceive his actions as illegal, unlawful, or wrong.

Hideo can essentially kill someone, and anyone who witnesses this would be unable to fathom it was Hideo who did it, and most likely put the blame on someone else nearby. This quirk however only works on people who directly sense him. For example, if a security camera catches Hideo killing someone, his quirk has no effect in protecting his "innocence".

The effectiveness of Ordinary World is proportionate to the amount of people versus Hideo's quirk stat. This makes extremely large crowds a potential risk, and as such Hideo must be careful to control who can see him in a crowd.

Stats (0/100) Support Equipment:
- 26x Blank Business Cards (Made from a special paper that gives them extremely hardness. Their edges are also sharp like knives.)