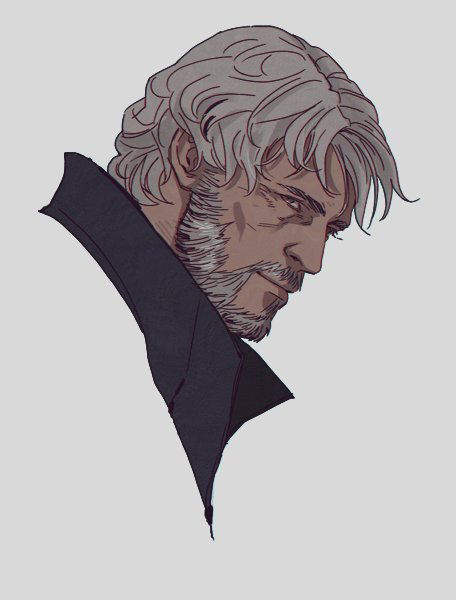 Age: 46
Height: 6'2
Weight: 222lbs
Gender: Male Physical Description: A weathered middle aged man whose hair has large streaks of grey that overwhelmingly washing out any color his hair had left. Its left in a rather mop top unkempt look. Rather than being peppered with grey its now peppered with remnants of his jet black hair that peak through at times. With a thick, strict jaw line, and a grey beard that frames his face Yoshitsugu's eyes appear with an amber glow behind them. The man stands tall, way above the average for Japan at 6'2. Yoshitsugu bears a strong resemblance to his father carrying strong American facial features which makes him look foreign even in his home country. Yoshitsugu is also a rather fit person contrary to his aging looks as his body is toned and carries large shoulders in an imposing form. On his body Yoshitsugu is covered in scars from his exploits as a pro hero that remind him the extent of danger his hero work carries. Clothing/Accessories: Yoshitsugu typically dresses in a dark grey overcoat that drapes down to his knees. Underneath he wears a white dress shirt with no tie and the top button undone in a casual fashion. Of which are tucked into dark grey slacks matching his overcoat with a brown leather belt looped through. Then down to his brown leather oxfords that finish it off. He also has underneath a underarm pistol holster for his 1911 underneath his overcoat. This inconspicuous business attire is what he also wears while on hero duty as it allows him to get the drop on villains, and appear inconspicuous in a crowd when doing investigative work as his quirk isn't flashy or meant for elongated confrontation. Personality: Yoshitsugu is a serious man, with a tendency to have a short irritable fuse. While he does not typically have large outbursts of anger, he can become quite short worded and solemn in his answers. Yoshitsugu is a man who maintains logicality and calmness in the most difficult situations. While his quirk isn't flashy or confrontational, he's learned to control his emotions and attempt to deduce the most probable solution using his quirk sparingly forging his "own" luck. Combat Information Rank: B-rank (Pro-Hero)

Luck of the Draw wrote:Luck of the Draw
Luck of the Draw is a Quirk based entirely around making implausible things, or unlike situations surefire wins. When the odds are slim or against one, this quirk is certain to shore up any doubts or impossibilities. The quirk is capable of making certain events happen, and has a cool down period between each event based on the significance of the event. Making the next card Yoshitsugu draw one he desires is a small event which has a small cool down, where as making the impossible such as one in one-million events like certain death preventable through what seems like mere magic. This is the nature of his quirk.