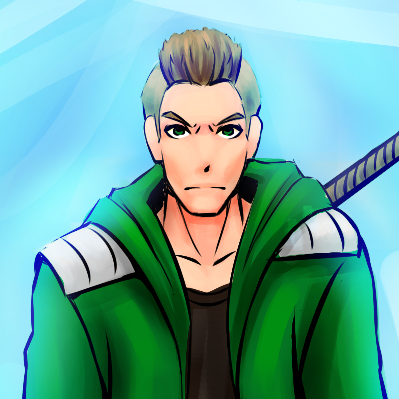 Tate Iwamaru Bio Information Age: 21
Height: 6'0"
Weight: 200 lbs.
Gender: Male Physical Description: Maru is well built for his age, his body rippling with well-defined muscle due to his secret training. His strong physique matches his equally rugged features and is off-set by his fair skin, a fairly square framing simple, brown hair and piercing emerald eyes. Maru's body is not without blemish, however, a smattering of small scars on various parts of his body as a result of his vigilante work and some training exercises going awry. Clothing/Accessories: In normal life, Maru wears a variety of clothes, anything appropriate to fit the occasion. Most commonly, he'll be found either in a grey jogging suit with red trimming and accents with tennis shoes or jeans and a plaid flannel of some color, usually green.

When performing his work as a vigilante, Maru's clothes retain a simplistic purpose. He dons a thick, green jacket with a black muscle shirt, gloves, durable brown trousers, and combat boots . He wears a utility belt containing a variety of tools. Hooked to the back of his utility belt and hidden Personality: Maru is a fairly reserved individual, a character of quiet, calm strength and a powerful will. He's the kind of person to seek a peaceful resolution first before engaging in violence, and his first instinct is to sacrifice self for the sake of others. This can and has been used against him on a number of occasions, both in secular and his vigilante work, and it is a character trait he is not blind or ignorant to. Rather, he steels himself to the consequences of that quality being manipulated because he knows the kind of person he wants to be. The discrimination that Maru has faced also makes him more empathetic toward those who are disadvantaged by society, and despite his work in construction paying fair wages, he lives simply so that he can use his finances toward helping wayward criminals that seek redemption get a fresh start.

As a side note, Maru is extremely careful with using any of the more complex powers granted to him by his Quirk, making absolutely certain Combat Information Rank: C-Rank Vigilante
Quirk:

Type of Quirk: Emitter Son of Gaia is a quirk that, ostensibly, allows Maru to control earth and metal with (Quirk) meters of his location with (Quirk) Strength and Speed, and such is reflected in his official records. However, through persistent study and private training, Maru has come to understand that his quirk actually grants him control over any material which contains carbon within that range. This can be used to a variety of effects, from something as simple as performing terrakinesis, or freely moving earth with his Quirk, to something more complex, such as gathering stray carbon particles in the air to either form small weapons and items or even reinforce other items with carbon. This Quirk cannot manipulate the carbon in living organisms, such as plants or people, in its unawakened state.