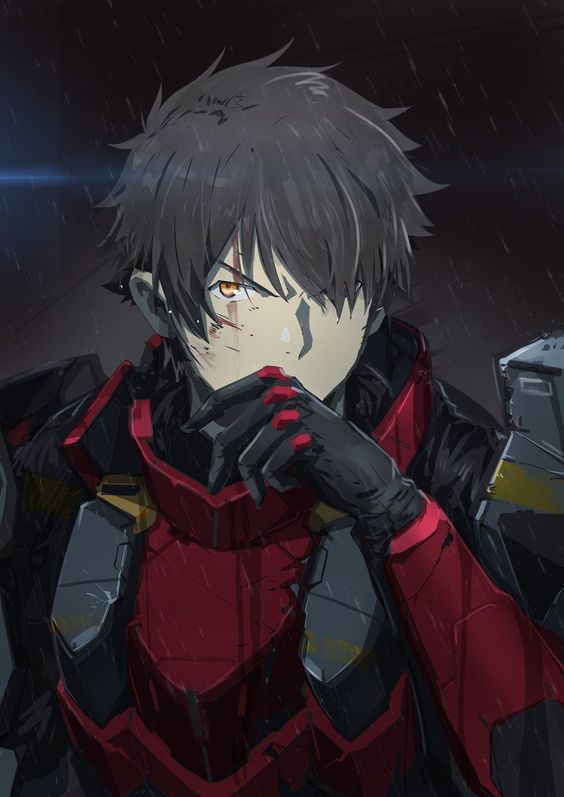 Age: 16
Height: 5’10
Weight: 168lbs
Gender: Male Physical Description: Tendou is a tall and muscular young man and therefore carries a rather physically imposing aura. He has medium length black hair and amber eyes. His facial features are handsome though perhaps a bit harsh as he often appears serious and standoffish. Clothing/Accessories: Naturally he is often seen wearing the UA uniform consisting of a grey blazer with green accents, green full length pants and a white shirt with a red tie. Off-campus however he is more inclined to wear something more comfortable like a loose fitting hoodie and flexible pants.

Tendou’s hero outfit consists of a flexible synthetic black pants and long sleeve shirt that is both fire resistant and shock proof. Overtop of this he wears a steel chest piece, shoulder guards, forearm guards and shin guards colored in a deep red and matte steel grey. On particularly serious missions he will wear a helmet as well though often he will go without it for simple training exercises and patrols. His gloves are made of the same black material as his other clothes though it has enhanced grip pads on its fingers allowing him to grip rigid surfaces more easily; the knuckles are also padded and adorned with steel studs for added impact from his strikes. Personality: Tendou is a confident person who strives for excellence in pursuit of his own ambitions. He trains hard and takes an interest in studying and maintaining good grades so that he can graduate near the top of his class and create good opportunities for himself. He isn’t particularly interested in making friends though if someone seems like they could be useful to him in the future or has abilities that might compliment his then he will put an honest effort into developing teamwork and building trust.

Ultimately, while he does enjoy helping others and genuinely strives to be a pro hero his driving motivations stem closer to a desire to master his quirk and use it freely in order to reach his own potential and live a life of recognition and success. Typically Tendou is reluctant to speak his mind and instead keeps a fairly neutral approach to conversations, knowing what is expected of him and preferring to avoid conflict with his classmates. Combat Information Rank: C-Rank

Balance wrote:Type of Quirk: Emitter
Initially thought to be simply a remarkable sense of balance, Tendou can instantly understand where the center of gravity is within any matter he touches and then manipulate it. This allows him to balance his own body at any point on anything and likewise perfectly balance/alter the orientation of any physical mass he is touching, though he can’t actually change the overall weight of what he touches only shift its allocation. His quirk allows him to control the center of gravity of matter for up to [Quirk Stat]/2 seconds after touching it as well as affect a mass up to the size of [Quirk Stat]x5 meters in diameter. Overusing this quirk results in dizziness and blurred vision.

Stats (35/100) Support Equipment:
As far as weaponry Tendou caries with him 2 combat knives, one on each thigh as well as a pouch full of 10, 2- inch diameter steel ball bearings.
word count: 1333
Top