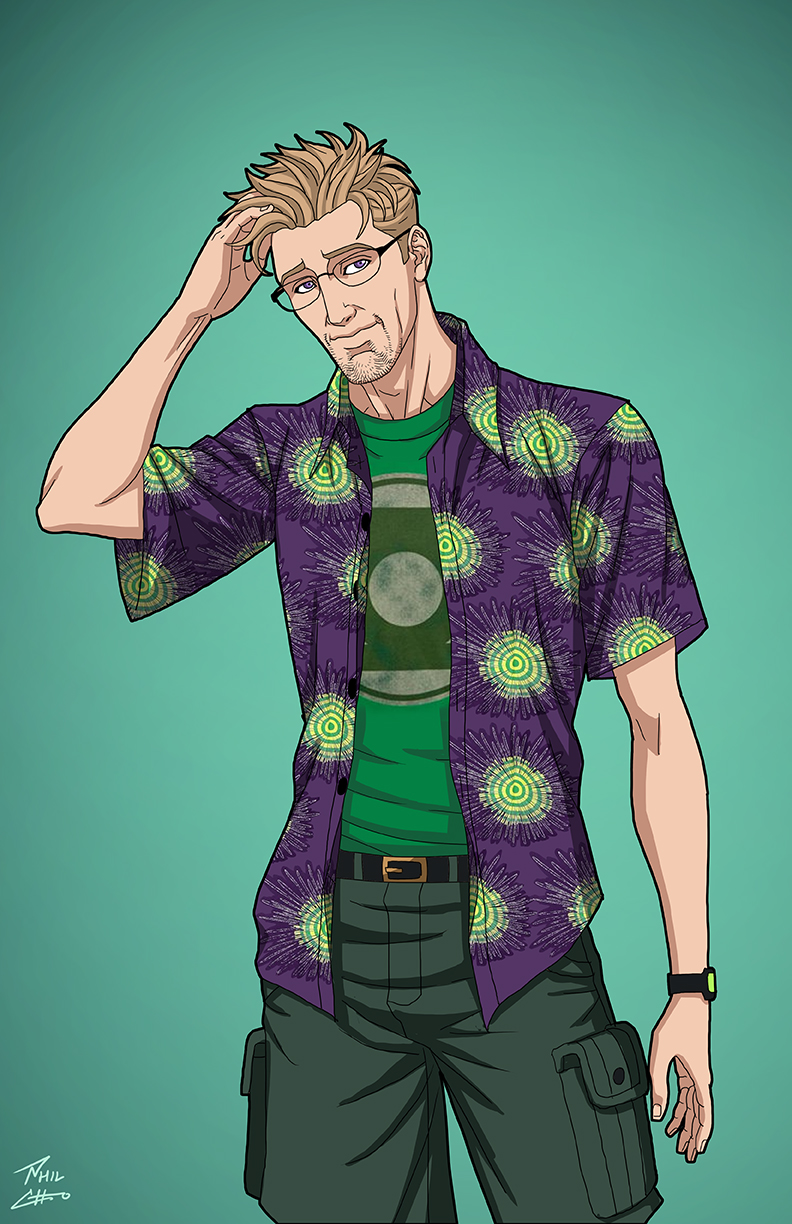 Age: 20
Height: 5'10
Weight: 165
Gender: M Physical Description: Tall skinny male with blond hair and beard stubble. The hair on his head is relatively short in length typically a mess from wearing hats. He has a set of feathered wings on his back with plumage that is red and orange on his limbs and throat. His irises are gold colored often looks tired. He smiles wide and toothy coming complete with a set of dimples. Square jawed. Wiry yet fit build. His hands and show an avian beard of prey influence being rough, yellow, and end in talons Clothing/Accessories: He often wears sun glasses with blue mirror tents and gold bands or has them on his shirt collar when inside. Outside he wears beanies when in his civilian clothes. He wears boot and graphic t-shirts
Hero costume: Long overcoat, compression shirts, and loose-fitting pants. Across the shirt is a non-descript bird spreading its wings. The overcoat has protective shoulder pads. With his costume he wears gloves (talons go through) with oversized cuffs and fedora. He doesn’t wear shoes with his costume.

It should be noted that his civilian and hero styles are complete contrast. With one being casual and the other being well groomed and even fashionable. He opts to show more of his avian influence as a civilian and cover most it as a hero. Personality: A thrill seeker who loves to dance and fight, most often at the same time. In combat his tactics are to use his speed and agility to his advantage, opting to humiliate his opponent while diverting their attention and biding time. He tends to be reckless and jovial. Heads strong adventurer and danger junkie he tends to take things too far (for better or worse) and has little regard for his safety. He holds grudges, is sarcastic. Oliver is a man of keeping to the letter of his word even if this ignores spirit of the agreement at times. He will make deals with anyone if there is value to it. He deals in good faith and if you break your word, he’ll find a way to take vengeance. He is dutiful and will fulfil his obligations in a timely manner. He is distant and prefers to observe things from afar but is quick to act if something “just isn’t right. He has no qualms about hurting people to get what he wants, most of the time he’d just patch them up. He doesn’t believe a society should lean on “Heroes” because “who’s to keep them in check should something go wrong?”
He likes to collect items from memorable experiences, whether it is a trophy or sentimental nick nack from a date. Combat Information Rank: B Hero

QUIRK NAME HERE wrote:*Phoenix * A mutant quirk that grants the user the physiology of a phoenix. This allows for flight with wings, passive regeneration, and the ability to heal others. The speed of his flight and rate of his healing depend on the quirk stat. Healing comes through restorative fire that user generates. Healing is taxing on endurance and is always less efficient when being done for others. While others are being healed the user is more vulnerable. Being an avian mutant quirk it protects the user from the atmospheric condition such as pressure and cold temperatures and offers eye protection to allow safe flight. Although this quirk doesn’t aide his perception, he maintains his perception despite his speed. Therefore he’d be able to perceive just as well at his max speed as he could standing still.

You still got 47 points to spend, so be sure to use them up. I won't charge for the camera/translator stuff .
word count: 27
Top
Post Reply
2 posts • Page 1 of 1